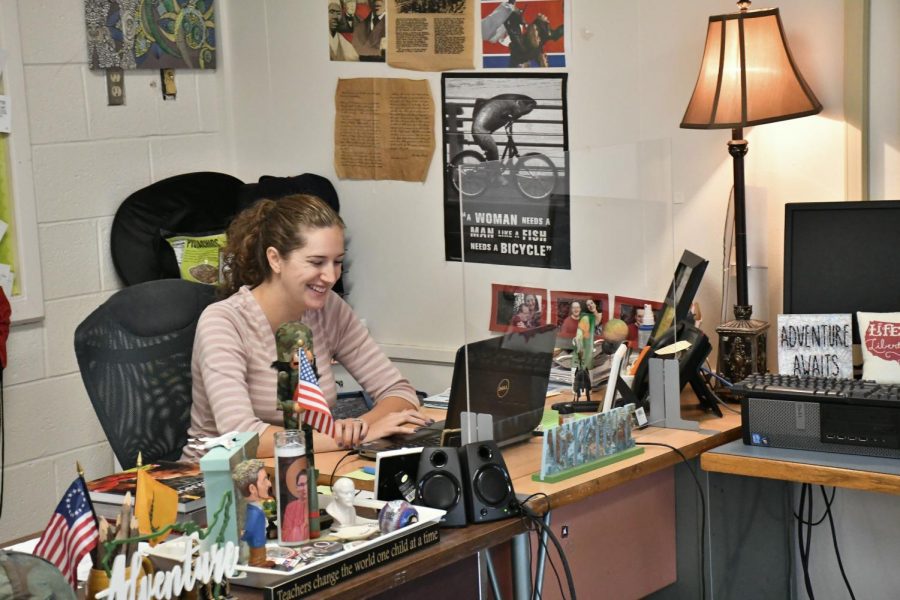 The switch from in-person to at home learning has been a massive change, not only for the students, but for the teachers as well.

Adjusting to online teaching has proven to be a struggle for teachers who are trying to make adjustments, find ways to make connections, and cope with not having in-person interactions.

These new adjustments have turned her “teaching world upside down,” according to English teacher Tiffany Westhoff, a 19-year veteran.

She said that everything takes longer, seems much more complicated, leaves her exhausted by 2:45 p.m. when the day finally ends.

History teacher Emily Brownstead agreed, saying that switching to hands on activities has been quite tricky.

Brownstead, who is in her seventh year teaching, said that she typically likes to do an introductory activity for each unit in her AP class, such as throwing pretend historical figure dinner parties or playing war simulation games.

Since those activities would be difficult to accomplish through a computer screen, Brownstead has instead been attempting to utilize various apps and websites that can combine videos, sound clips, and interactive charts.

She has been able to use discussion boards to continue a tradition of bell ringers which get her students talking and sharing ideas.

Math teacher Kelly Lindsey, who has been a teacher since 1981, also said that she has had to change the way she interacts with content.

Instead of her students being able to sit in groups so that they can work and communicate with one another, they are having to learn alone.

That means that Lindsey is having to focus more on introducing and delivering content during her lessons.

“I have to decide what the fundamental idea of each lesson is and make sure I communicate that clearly in a short time frame,” she said.

Lindsey is also trying to learn new technology like Kami, which she hopes will add to the flexibility of her teaching and help more students understand content.

Conversely, seven-year Science teacher Kevin Williams said that teaching online has not been that big of an adjustment for him.

“Since most of the work that happened in my class was submitted in Canvas and completed on Chromebooks (before Covid), the only thing that’s really changed is not having students in my room and not being able to do labs,” Williams said.

He mentioned that he now has much more time to plan, grade, and give students individual feedback and help if they need it.

Looking for new ways to connect

Communicating with students has not been simple for Westhoff.

She said that when a student has a question in a classroom setting, she is able to answer it for all the other students to hear. Online, however, she has to answer the same question multiple times sent by multiple different students, which takes more time than it did in the past.

Another difficulty is that students work at their own leisure, meaning that she is having to answer questions and emails at all hours of the day.

Another common issue that all the teachers mentioned was that they felt as if they were often talking to themselves.

“Virtual classes have a completely different dynamic than in person classes,” Williams said.

He says he tries to interact and talk with students like he typically would in a classroom, but their mics are muted and their cameras are off.

“No one laughs at my jokes and I can’t even see if anyone is at least rolling their eyes,” he said. “I’m starting to think I’m just not that funny.”

Brownstead said that it is sad being in a classroom alone, which is why the Google Meets are always her favorite part day. Even so, the students’ cameras are turned off and she feels as if she is talking to herself.

“I love teaching because I love working with high schoolers,” she said. “Not getting to personally interact with them daily has definitely been hard.”

The majority of the teachers and students have not met in person before which is very different from NTI in the spring.

This makes it difficult to develop relationships with the students, Williams said.

“There’s a lack of that classroom togetherness and solidarity,” he said.

Not being able to teach in person has also made it much more difficult to determine whether teaching methods are working.

Linsdsey said that she absolutely hates not teaching in person because she can’t judge whether she is making sense or not.

“Having personal interaction is how teachers get to know students and how students know what to expect from teachers,” she said.

Westhoff agreed, saying that not being able to see her students on a daily basis makes her feel helpless.

“We are all struggling students and teachers,” she said. ” I want to be there for my students as I always have tried to be in the past, but not seeing them face to face makes connecting and building trust and relationships difficult with new students.”

Westhoff said that everyone is learning to adapt slowly and that we will eventually get a hang of it with a little patience and time.

Another downside to learning online is that it makes teaching much less fun.

Westhoff said that she loves the relationships that she builds with her students and the camaraderie formed with in-person interactions. It is not impossible to accomplish those things online, but it definitely presents a new challenge, she said.

For Brownstead, she hopes that her craziness and silliness translates to teaching online.

Even Williams, who is known for lighting flames and making small explosions, said that he has not been able to get into any shenanigans while teaching online.

So far, he claims he has only lit one Cheeto on fire and has not even gone through an entire box of matches yet. Williams said he did accidentally scoot his computer too close to the Van Der Graff generator (a machine that creates electricity and static), but other than that, nothing too interesting has happened in his classroom this semester.

On the bright side, he said that no hair has been burnt in 2020 so far.

There are additional positives to online teaching beyond just a lack of flaming hair.

Lindsey said that the video instructions she is creating for her current students will add a layer of support for years to come.

Similarly, Brownstead said that students are able to replay these filmed lectures, which makes it easier to study and remember course material.

She also said that online “shows student and teacher resilience to accomplish any difficult task and adapt to the changes in (the) world.”

Westhoff agreed, saying that she believes online is teaching students to be more independent and that they will come back to school with “stronger problem solving skills as well as an understanding of the importance of paying attention to detail when reading directions and using resources provided.”

She also believes that it has given students a new appreciation for in person education.

Prior to the pandemic, she would hear students talk about how they wanted to be homeschooled or do virtual education. Today, she believes their views on that topic would be completely different.

Lindsey said that another bright side of all this craziness is that there are a lot of good teachers at Boone who are willing to learn new things so that students can be successful.

“Every teacher really just wants their students to learn and we are ready to do anything in our power to help that happen.”