2020 has been historically bad for natural disasters. Are humans to blame? 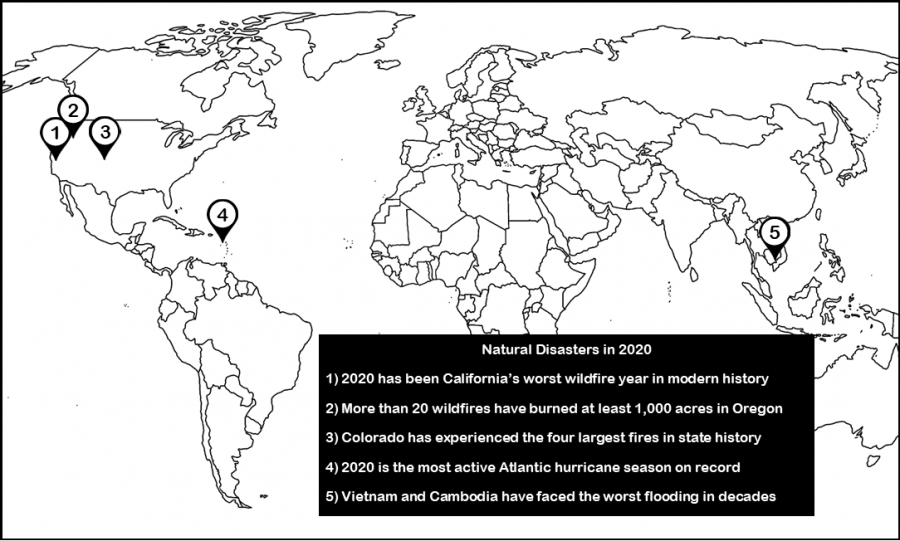 Record-breaking natural disasters have hit all over the world in various countries, taking lives and destroying billions of dollars worth of property. Some claim it’s just bad luck, but scientists say it’s the consequences of our own actions contributing to climate change.

According to the NIFC (National Interagency Fire Center), as of Nov. 3, blazing wildfires have consumed a combined total of 8.6 million acres of land this year in 10 states including California, Colorado, and Oregon. Looking into Colorado, 3 out of the 4 largest wildfires in its history have all burned in 2020.

The weather in Colorado leading up till now has been especially favorable for wildfires to spread. The Colorado Climate Center had stated that for the first time since 2013, all of Colorado is experiencing drought and 97% of the state is in exceptional, extreme, or severe drought categories.

They had also said that much of the Southwest is “bone dry” as well. Today’s droughts are mainly caused by increased evaporation due to warmer weather according to Brad Udall, senior water and climate research scientist at the Colorado Institute. According to Udall, the root cause of the increase in temperature is the build-up of a heat-trapping carbon blanket produced from the burning of fossil fuels.

There have been 29 tropical depressions,12 of which have become hurricanes. Over 150 people have lost their lives and more than 24 billion dollars in property damage have been reported.

According to the Washington Post, climate change from greenhouse gas emissions has made hurricanes worse by increasing the global sea surface temperature by 0.13 Fahrenheit every decade. Warm water temperatures contain heat energy that hurricanes use as fuel.

A study conducted by Prof Pinaki Chakraborty from the Okinawa Institute for Science and Technology in Japan shows that hurricanes decay at a slower rate in warmer climates because of the increased moisture in the air. Studies published by the Proceedings of the National Academy of Sciences says that the chance of a given tropical storm becoming a hurricane that is Category 3 or greater has grown 8 percent every 10 years.

Extreme weather events are not just more common in the U.S.

Vietnam and Cambodia have faced the worst flooding in decades this year in October, with more than 5 million people affected by it. In Vietnam, 130 people had died, over 270,000 homes had been flooded or damaged, and nearly 35,000 acres of agricultural land had been flooded.

In Cambodia, no less than 38 people have died and 18 have been reported missing, and a total of 500,000 acres of cropland and rice fields have been flooded. Both countries first received 90 inches of rain from Tropical Storm Linfa during Oct.10-13.

Then Tropical Storm Nangka added an additional 14-16 inches followed by Tropical Depression Ofel and Typhoon Saudel. A study conducted by climate researchers from the University of Miami argues that greenhouse gas emissions from human activities are to blame for the hotter seawater and more intense rain that causes huge flooding.

“The water is warmer, and so the air above it is warmer. Warm air can hold more water. So that means there is more water available to rain when a storm comes through,” said Jeremy Klavans, one of the study’s co-authors and a doctoral candidate at the Rosenstiel School of Marine and Atmospheric Sciences.