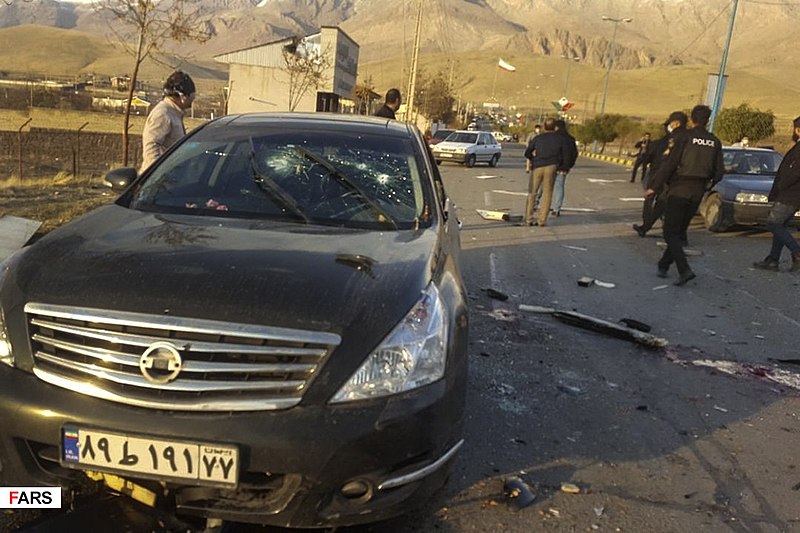 Officials move about the scene of Iranian scientist's vehicle after he was shot outside of his car in Tehran, Iran on Friday, Nov. 27.

Iranian scientist Mohsen Fakhrizadeh was shot outside of his car in Tehran, Iran on Friday, Nov. 27. Iranian authorities have provided conflicting stories on how he was shot.

According to the defense ministry, there was a gunfight between Fakhrizadeh’s bodyguards and several gunmen. Witnesses have reported saying that they had seen three to four assailants get killed.

On the other hand, Gen Fadavi, the deputy commander of the Revolutionary Guards, says that the cause of death was an artificially intelligent machine gun mounted on a Nissan pickup truck. When Fakhrizadeh stepped out of his car that Friday, the machine gun’s facial recognition zoomed in on his head and shot him. This story has been met with skepticism from experts in electronic warfare.

Fakhrizadeh was head of Iran’s Organization of Defensive Innovation and Research. It is speculated that the reason for his assassination was because of his involvement in a program that was secretly continuing a project to develop a nuclear weapon, a project that was shut down in 2003 according to the International Atomic Energy Agency.

Another speculation suggests that someone was trying to stop the U.S from rejoining the Iran nuclear deal when President-elect Joe Biden takes office.

It is unclear who is truly responsible for the assassination, but foreign minister Hossein Amir Abdollahian has said on Al-Alam TV that there is evidence that Isreal was involved somehow. Israel hasn’t confirmed or denied this allegation, but two days prior to the incident, an unnamed individual said on Israeli TV that “Fakhrizadeh’s activities had to be stopped” and that “the world is a safer place without him”.

Iranian officials also suspect that there was U.S. involvement because of Secretary of State Mike Pompeo’s presence in the region during the time of the attack. Officials in the Trump administration have denied any connections to Fakhiradeh’s killing and said that Pompeo’s presence was just a coincidence.

Due to the potential U.S. involvement, some Iranian officials see this as an indication that Washington is not a reliable negotiating partner, but Iran’s President Rouhani and others believe that negotiations are crucial to emphasizing diplomacy. Many in the Iranian Republic have little confidence in talks with the U.S., but still, experts believe Iran is likely to agree to talk with the U.S. if they focus on returning to the nuclear deal.

Rouhani blames Israel for the killing of Fakhiradeh but says that Iran will not fall victim to their trap of engaging in rash conduct that could provoke larger conflicts. It is unlikely there will be immediate action towards Israel as to not derail potential talks with the Biden administration.