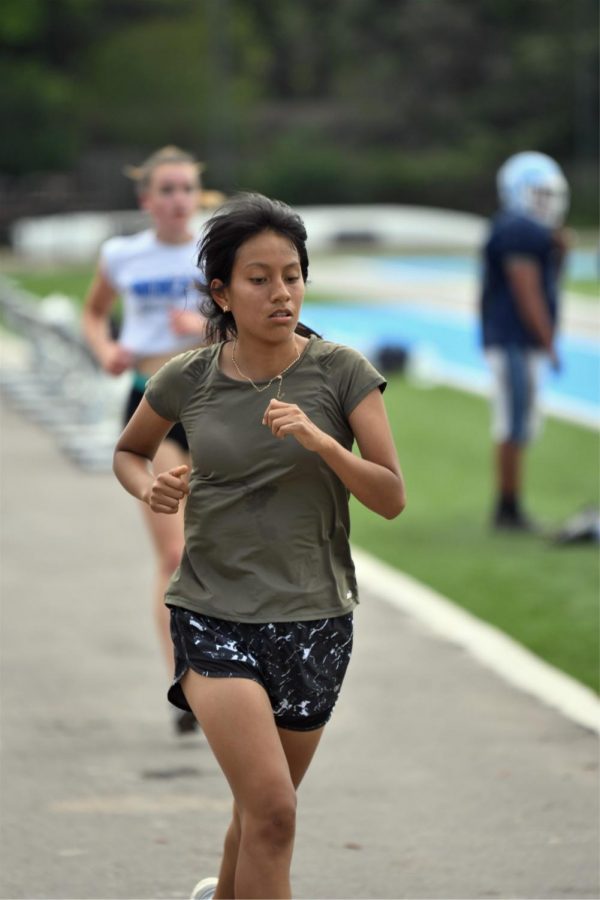 Sophomore Diana Zumba runs around the track during practice on May 19 while the football team conducts spring practice on the turf field. A track with no markings or rubber surface is one of several challenges faced by the track programs in 2021.

During the construction of Boone’s brand new turf field, the track is also under construction, and won’t be finished until the weather is warm enough for the track to be rubberized.  In the meantime, the boys and girls track team had to come up with some creative ideas to practice.

The boys team practiced in the hallways after school, running from the upstairs to the downstairs to the gym. They also ran in the parking lot next to the new auditorium, running in between the light poles.

The girls on the track team practiced upstairs in the main gym; they would run laps upstairs around the bleachers. They also ran to Fillmore’s Dairy Hut and back, and sometimes would run laps at Stringtown Park.

The fact that the track is an unmarked concrete loop and field event stations are off-limits has frustrated some runners.

“We get no real work in,” junior sprinter Brent Houglin said. “It kills our feet and shins running on concrete. I really can’t wait till we get our track again.”

These challenges have been frustrating for the athletes

“It’s different and difficult especially for the new guys that haven’t started on a track,” said junior sprinter Preston Troxel. “They are still doing good, but it would help with experience for everyone to get in the flow.”

The girls team also had a hard time adjusting to the precautions due to the construction.

“It’s difficult knowing that we have a disadvantage compared to the rest of the schools that we run against; especially since most of us are newcomers,” sophomore sprinter Hailey Sullivan said. “But with that being said, it also makes the finish line feel ten times more worth it. We as a team work hard everyday to lead to success, and it will eventually pay off. The schools next year better watch out.”

“I do throwing events, so I kind of needed to depend on a place to safely throw without the chances of hurting myself or the other girls as well,” Johnson said. “It’s also been hard seeing our improvements & how much farther you’re throwing, when you don’t have a set place to start yourself at.”

Despite the challenges, junior sprinter Hailey Carter is staying positive and looking to the future.

“Running without a track was a hard obstacle for our team but we have been putting in the work and doing what we can with this tough year,” Carter said. “We’re all excited for next season to get our new track and better ourselves on and off the track.”

Disclosure statement: Grace Robinson is a member of the girls track and field team at Boone County High School.