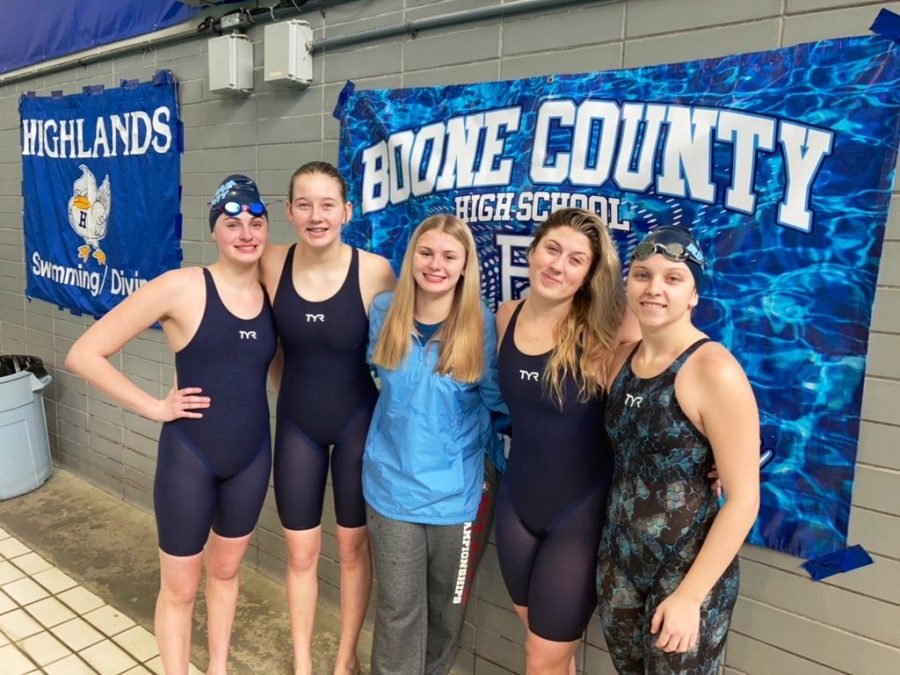 Five members of the girls swim and dive team have had a historic season in which they qualified all three relays for the state championship for first time ever and broke a school record.

The qualifiers include seniors Sydney Whitford, Sophia Pile, Naomi Lively, and Bayleah Vogel, and junior Lexi Kollar. All the girls said they were stoked to have finally achieved this with each other and make school history.

Whitford swam on all three qualifying relays—the 200 Medley, the 200 Freestyle and the 400 Freestyle—and said it meant a lot to her.

“I had been dreaming of that moment since I started swimming for Boone, and finally achieving that dream was one of the highlights of my career,” she said.

She scored 1181 career points, which is the most in the history of the girls team.

Whitford has been swimming for Boone for seven years, and she said, “this team has helped me through a lot of challenges I faced within the sport, and I cannot thank my teammates enough.”

Kollar qualified in four events: the three relays and a 100 Breaststroke, which made her the first girls swimmer to qualify for an individual event since 2008. She broke a 17-year-old school record in the 100 Breaststroke at the regional preliminaries and then broke her record again the next day at regional finals.

She commented that she felt out of place at state because she had never been a “club swimmer” like the vast majority of her competition, but she said she was reminded of her hard work and realized she did belong.

Kollar has also been swimming for Boone since middle school and she credits her teammates for helping her complete two of her personal goals this season.

“It all just felt too real,” she said. “It hit me that we made state. It was amazing.”

Lively qualified for 1 Meter Diving and swam on the three relays, but it was her first and last year swimming for Boone.

She was homeschooled until this year, and she said it was bitter-sweet for her to know that state would be the last swim she would share with her teammates.

Vogel, who qualified for the 200 Medley Relay and 400 Freestyle Relay, said that this is the first team she’s been a part of, and it taught her so many lessons of teamwork.

Swimming also allowed her to get into shape, gain confidence, and improve her mental health, she said.

Pile qualified for the 200 Free Relay and—like Vogel—she learned the importance of teamwork through swimming.

“Swimming taught me … that sometimes things will have ups & downs and that’s okay; it’s how life works,” Pile said.

Making it to state though, allowed these girls to finish their high school swimming career on a high.