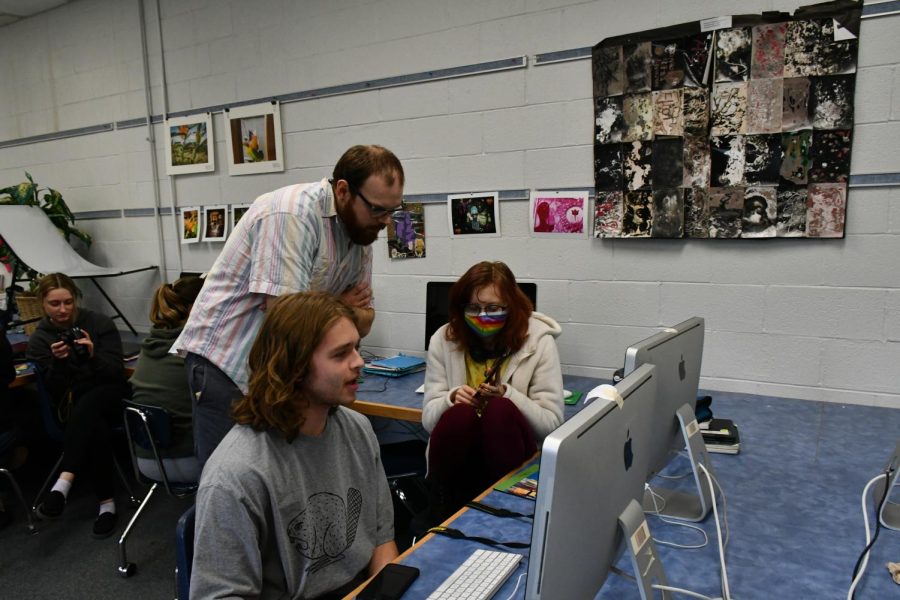 Daniel Edie (top) provides feedback to photography students who have finished taking pictures around the school.

Photography teacher Daniel Edie has been on a journey that has shaped him into the genuine person that he is today, a person who makes students feel welcome and treats them all with respect.

Edie says he has always been interested in art and photography.

He said his mother was always supportive and saved up to buy him his first point and shoot camera in middle school; then she bought his first modern digital camera when he was in high school.

Edie said that he decided to become a teacher because he wanted to be able to merge the things he loves doing with being able to help people and build relationships with them.

Perhaps that is why it is not surprising that Edie said that if he ever decides to pursue a masters degree, he would likely undergo a career change into art therapy.

Edie said that his favorite thing about teaching at Boone is the people.

“Although the district and our school is quite large, I feel at home,” Edie said. “I’ve also met some of my favorite people here.”

He said the size of Boone was a bit of a shock when he first arrived, as the school he attended housed kindergarten through 12th grade in one building with about 350 students.

His school experiences may have made him more empathetic.

He said he was over 325 pounds entering his freshman years, but he used his school’s fitness center after school and became conscious about what he was eating. By his senior year of high school he was down to 215 pounds.

Edie used to enjoy going to the gym regularly, but his back pain prevents him from taking it more seriously.

During the spring and summer months, Edie uses his free time to grow bush beans, potatoes, catnip, and wildflowers on his small balcony garden.

In addition to working on his garden, he also enjoys watching hummingbirds come to enjoy the feeder and blooms.